Early start again today. We left the Hosteria at 6.30a.m. and drove to the railway station at Rio Bamba. We boarded a luxury steam train which runs from Quito to Guayaquil.

We only took a section of the route. We had a short stop to see noch a church. There were the obligatory souvenir shops there but nothing to tempt me.
The next stop however was a little town where there was the most amazingly colourful market. Working people mostly wearing traditional dress, everything one could wish for was on sale. The moment the train stopped stalls spread across the tracks. I took hundreds of photos because it was so photogenic.

Thee local people are very tiny. The funniest thing we saw at the market was a little wizened old lady in purple traditional costume pull out of her pocket a mobile phone complete with matching purple phone cover 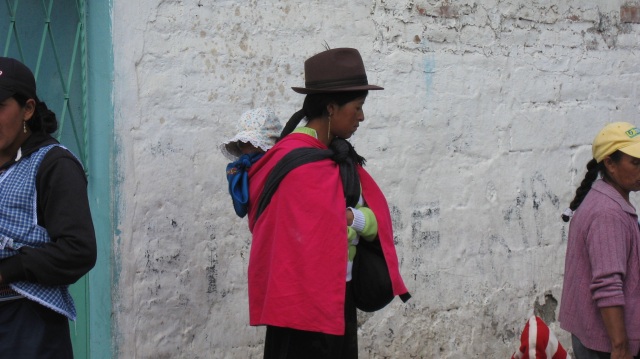 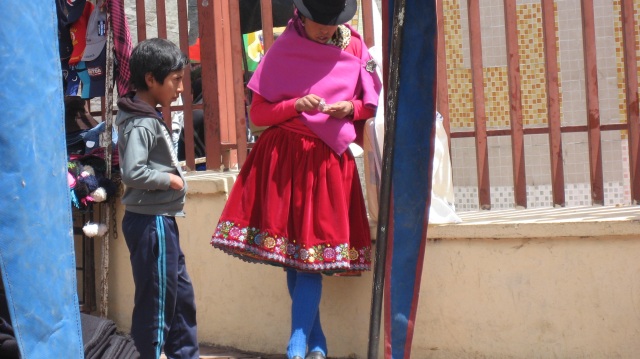 I bought a skirt like this one for Arrielle, I bought the smallest I could find but she will have to grow quite a bit before it fits!

We travelled through amazingly varied country through passes between mountains and across very fertile agricultural country. The train travelled round the rim of an enormous extinct crater. The ground within the crater bright yellow with sulphur deposits.

We travelled round the famous Devils Nose. This is a section of railway that was considered impossible to build because of the steep terrain. The Equadoran President of the time was determined to complete the line and in the process 2500 men were killed.
After leaving the train we had a 3 hour drive through very mountainous country. The road looped back and forth with precipitious drops to the side of us. Wonderful views!
We had been warned that there was some civil unrest in the region and we had seen dozens of Police armed with riot shields but it looked that we were going to avoid any problems until about 2/3 of the way when suddenly ROAD BLOCK. The protestors were burning tyres in the road and although the Police were there they were unable to open the road. We were forced to take a diversion which added considerably to our already long drive and day.
The diversion was an unpaved single lane track and it added about an extra hour to our journey. The extra time taken and the bumpy road added to the discomfort of the majority of our group. I was never so glad to be a camel! I was the only one who didnt have to queue at the toilet when we reached the highway again and a petrol station with toilets.

This entry was posted in The Galapagos & The Andes and tagged Devils nose, steam train. Bookmark the permalink.

3 Responses to The Devil’s Nose