We were travelling all morning, which was very restful and was appreciated by all, especially the numerous Americans who were seriously jetlagged. The famous Blue Danube was disappointingly grey but much wider than I expected. In places it seemed over a mile wide.

we toured Bratislava this afternoon. Quite a small city, very proud of its 17th an 18th century buildings and apologetic of those that the Communists disfigured. I think it must be the fast food capitol of Europe, dozens of fast food stalls and hundreds of eateries of all classes and styles. I doubt that the local housewives ever cook. 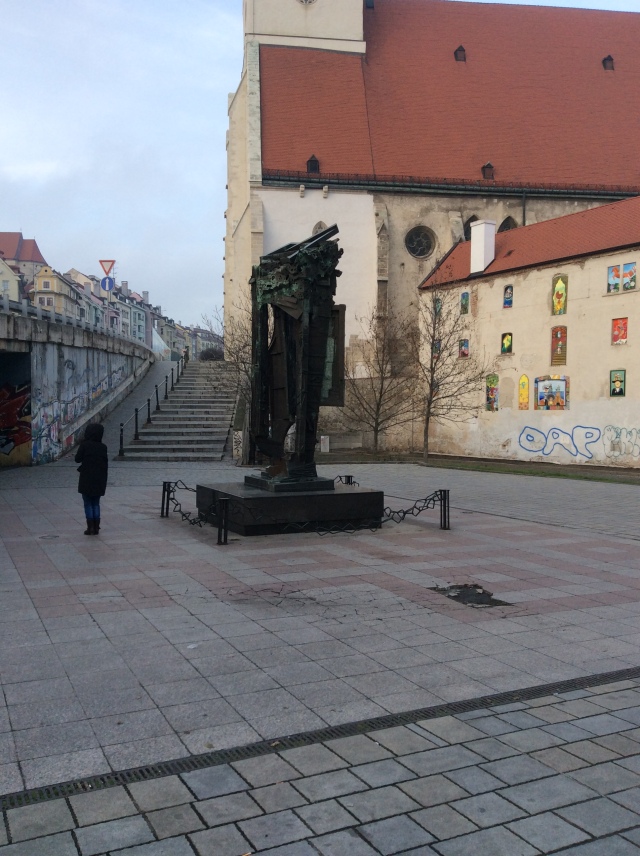 The above is the Holcaust monument which stands on the site of what used to be the Shul. A Shul stood here for over a 100 years and survived  two World Wars but it was demolished during the Communist regime. An enormous wall of black marble etched with an image of the lost Shul stands opposite the memorial.

I am back on board the ship now watching a most beautiful sunset, bodes well for the weather tomorrow.

This entry was posted in Europe in Winter!, Uncategorized and tagged Blue Danube, Bratislava, communists, Danube, shul. Bookmark the permalink.