This afternoon we were treated to a very rare experience!

We returned to the Safari Park and our guide led us to a small lake. Beside the lake sat a young tigress, we stopped the vehicle about 15 metres from her and she ignored us. 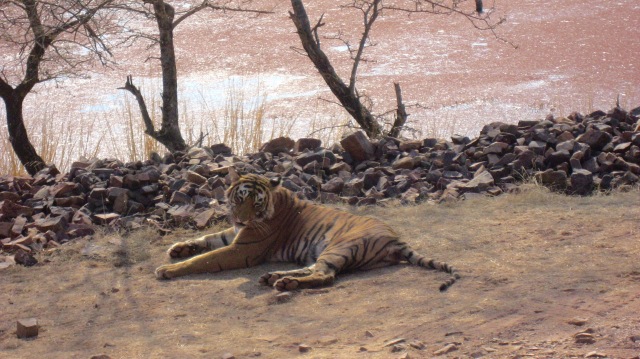 We sat watching her for some time and gradually became aware that two deer were approaching, the tigress pricked up her ears and then like lightning she went for the smallest deer!

With the speed of sound she had the deer by its neck and she held it like that with an occasional shake for about ten minutes. Apparently a mature tiger can kill with one bite, our tigress was only 3 years old.

Once dead she carried her kill away to the long grass and we were able to follow her most of the way.

Many of the  tourists here only see a tiger at a distance as we did this morning. Some don’t see one at all. To see one close up is very rare, to see a kill almost unheard of. The guide hasn’t seen one for over two years. He was more excited than anyone!

This entry was posted in The Golden Triangle and tagged close up, kill, rare experience, tiger kill, Tigess. Bookmark the permalink.