We had beautiful weather for our trip to the Peninsula. Stupidly I lost all my photos from the day. The attached photos are courtesy of Gary, thank you Gary!

We drove south on the very scenic coast. Rugged mountains on our left and rocky coast to our right, we made several camera stops on the way and eventually entered the very extensive National Park. Within the park we could see more of the fynbos, which is the local vegetation. In the main this is low growing plants with colourful but tiny flowers, pink, purple and yellow.

Amongst them several varieties of protea. We were warned not to feed the baboons which are supposedly wild in this area, but we saw none. Ostriches aplenty though and they are said to be more dangerous than the baboons but not so acquisitive, baboons being notorious thieves!

We visited the  lighthouse at Cape Point climbing dozens of steps to take photos and clambered over rocks at Cape of Good Hope to snap the famous sign. 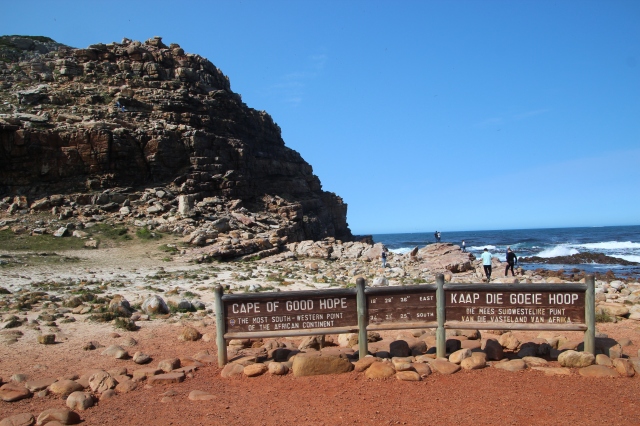 We drove back via Simonstown for lunch and Boulders for the penguins. The penguins are not native to the Cape but come from Antarctica. About 100 years ago a breeding pair settled here and now there are 1000’s of them.

Almost as many penguins as tourists!

We were back in Cape Town in time for the cable car ride to the top of Table Mountain.

Loooooong  queues for the cars but a spectacular trip! The cars are built with a revolving floor. As the car moves the floor rotates so everyone gets a 360o view of the city below.

2 Responses to The Cape Peninsula.