We left Franz Josef and started our journey by driving up the coast. Beautiful scenery again at every bend in the road. We stopped for lunch at a little seaside place called Hokitika. A black sand beach that seemed to attract a great deal of driftwood.

From there e were due to take the Scenic Alpine Railway to Christchurch, however there had been a fire on the line and tbe railway was out of action, so we drove the rest of the way.

Leaves on the line might be a joke but fire is disastrous!

It was no hardship because the route continued very scenic as we crossed the Southern Alps at Arthurs Pass, stopping to photograph this viaduct and the kea bird.

Christchurch was subjected to a devastating earthquake in 2011. There was considerable loss of life and the city centre was very badly damaged! 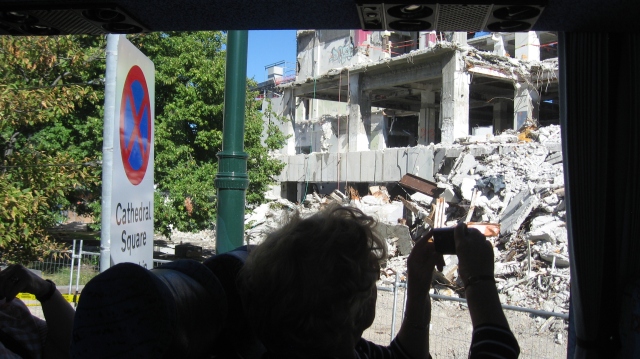 Tthere is massive building work going on and we were told that Christchurch will be one of the most modern cities in the world when the building work is complete!

For the moment the city is a mess but it has a lot in its favour including an enormous green space in the centre. It would be interesting to see this city in 5 years time!

This entry was posted in The Antipodes and tagged Christchurch, Hokitika, kea. Bookmark the permalink.